Mum is to appear in the new film 'Summer in February'


The movie 'Summer in February' opens with a scene on a Cornish cliff top that features my mother as a bird-watcher. She tells me that she looks just like her mother on screen.

The film is beautifully photographed by Andrew Dunn, who funnily enough was the lighting cameraman when I worked on the crew of the BBC drama serial 'My Family and Other Animals' made on location in Corfu. He had a house near ours in the Cotswolds and knows all about my mother's kitchen.

'Dominic Cooper is horrid,' she declared.

'Oh, no. Horrid as the character. In real life he couldn't be sweeter. He has a lovely smile.' 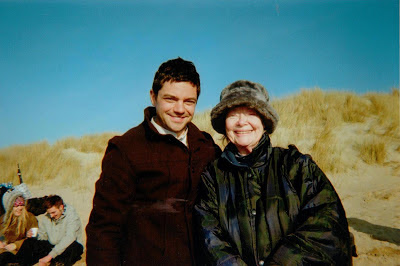 You won't see Mum on the trailer but it is beautiful ~

To read a little about Dan Stevens' next film please click here.