Parrots I have known ~ 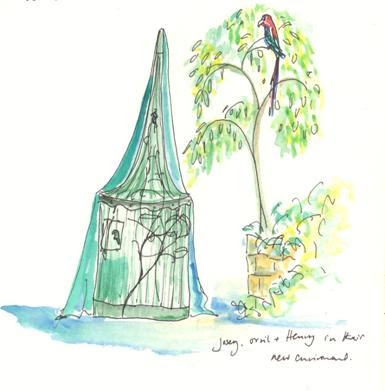 Today I have been writing about parrots. Parrots I have known. Parrots I have lived with. Parrots I've observed in the wild. I've even appeared in a movie with a parrot on my shoulder. And on television.  In front of the camera not once but twice!  Am I brave or what?

When I was little my grandmother kept two budgerigars. They were called Pippernella and Chrysanthemum. Pippanella was blue, Chrysanthemum was green and yellow. Everything about them entranced me. If we were good and very gentle we were allowed to take them out before bedtime. Since Granny was an invalid, stuck in the house all day long, the birds had become her very special friends. They were beautifully cared for. If one of them shed a tail feather it was kept in a glass vase on her desk.

My parents must have kept parrots, parakeets or macaws for most of their married lives. We were given two of them. They out-lived their original owners and were brought to our house. I've no idea why. It is amazing that they stayed. My mother couldn't bare the thought of them being cooped up in a cage so let them out as much as possible. They loved this but it caused endless dramas. Josey-Jo, my mother's Blue-fronted Amazon parrot would fly around the house only to lose sight of places to perch. If you weren't careful she'd land on the top of your head. It can give a girl quite a fright. Once she landed on the side of a frying pan, once she ended up in the dish-washer. Dad nearly turned it on with her inside. She did terrible damage too, nibbling away at the top of veneered corner cupboards or antique picture frames, dining room chairs and rather a good chest of drawers.

We thought that an aviary would be the answer. The result was an enormous parrot cage built outside the kitchen door. This is illustrated above. Please don't copy the design. It did not work well. For some reason it now houses guinea pigs.

Josey-Jo was eventually given quite a large cage in the dining room where she happily spent her days. She originally belonged to an old lady and had picked up her voice. When you arrived home she would say, 'Hellow' in a slightly cracked and rather smart inquiring manner, sounding exactly like an 87-year-old woman. Any stranger would ask if Granny was still at home. No burglar alarm could work better.

Henry, our scarlet macaw, had a perch rather than a cage. He was unable to fly but loved being allowed to sit in the willow tree or on a post in the garden where he could see everyone come and go. Sometimes he would climb down and alarm visitors by walking pigeon-toed across the lawn to greet them, bent forward so that his tail did not touch the grass. His long red tail feathers were kept in a jug too.

When I lived in Africa I often came across small Meyer's parrots in the wild. Apparently they are often considered 'parrotlets'. No matter. They gave us such joy. One sighting and one's spirits would soar. Apparently they are classified as 'trans-continental parrots', having the widest distribution of any parrot in Africa. You can find them from South Africa up to Ethiopia, flashing through the trees.

The filming? Ahh, you can read about filming with Captain Flint's parrot and appearing on Animal Magic on my other blog. The most bizarre experience - which I don't think anyone has ever written about - was when I went with Alastair Fothergill to watch the wildlife camera man Simon King filming great tits in Bristol. They were about to fledge from a bird box nailed to someone's shed in rather a grotty part of town. The only way of reaching the long back garden was through a basement flat belonging to an odd old couple who were living in an extreme state of squallor and filth, almost like tramps. They had a budgie. It seemed very happy and was singing away but obviously hadn't been cleaned out for years, so many years that a column of black and white flecked guano had formed on the base of the tiny cage, rising nearly five inches high towards the perch on which the little bird sang. I didn't know what to say. We walked on to relieve Simon. This was crucial. He hadn't been able to leave his camera position all day for fear of missing the moment when the little great tit chicks left the nest. As a result he was dying to go to the loo. I told him that he'd better let Alastair take over for a while or he'd end up like the budgie.