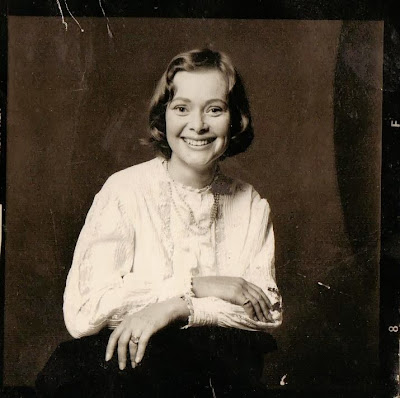 Readers of Funnily Enough often ask after my mother - worried that she might be offended by some of the stories recorded in my diary. What they do not know if that she actually asked if I could put a picture of her looking absurd on the front cover. 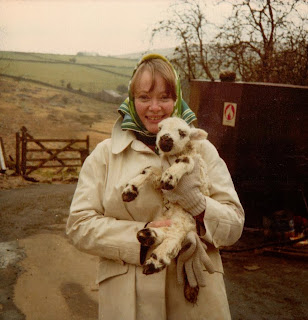 Mum used to make an effort to look pretty. She started working as a television presenter in about 1969 and was with HTV for years, reading the local news and presenting a children's programme called 'It's Time For Me', 'Women Only' with Jan Leeming and appearing on Christmas Specials.
At the same time, she worked for BBC Radio Bristol presenting a sports programme called 'Come Alive' and reading letters on 'Any Answers' before there were phone-ins. 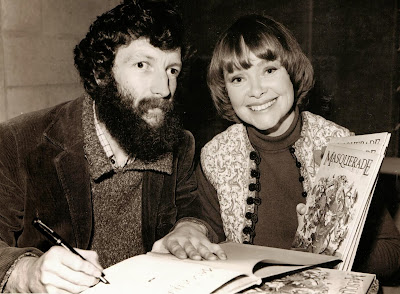 Here she is interviewing the artist Kit Williams at the time he bought out his book Masquerade and sent all of England on a treasure hunt, looking for a golden hare. 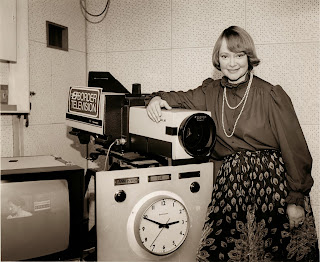 By 1980 Mum was working as a continuity announcer for Border Television. We nearly moved up to the Lake District. I found this clip of her appearing on Grampian TV a few years later ~


Whilst in-vision announcers disappeared from television screens in the 1980s Mum did not. She began gaining small parts in period dramas, many of which were filmed on location in the West Country.

She has always thrived in front of the camera, whatever the weather -

readily admitting that she loves dressing up and grabbing any chance to appear in costume.


What she is not so keen on is wearing fur coats.


She hates the idea of animals suffering for fashion,


but is happy to comply with the costume designer's wishes. Here she is playing Lady Kroesig, mother to Anthony Head in the LWT adaptation of Nancy Mitford's novel Love in a Cold Climate, in which her daughter Tamzin played the young Linda.


To see more photographs of Mum in action, click here!