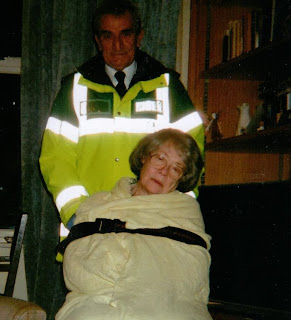 For someone who is never ever ill, and hates even the idea of hospital, it is rather surprising to digest the fact that Mum loves playing a patient.

She doesn't seem to mind what she looks like on the screen. Here she is playing Louise, an A&E patient in 'Casualty', the long-running hospital drama made by BBC TV.

The call now is for old ladies in need of comfort. This was a short WWII mystery movie called Lost Hearts shot on location near Malvern in Worcestershire in 2011.

She absolutely adored being in 'Doctors' for BBC TV - you can tell from this photo.

Things were once different. She always enjoyed being a medic, although appearing as Nurse Fisher in the film 'Diagnosis Murder'  with Christopher Lee did not do much for her career in that area.

I am sure she did something terrible to the poor man in the wheel chair. He didn't look very well at all.

There even was a time when she played a doctor. That was alarming.She played Dr Machin in the ATV soap opera Crossroads. So many people though she was a real doctor she could hardly go to the supermarket.