It can be rather a shock. There we are, innocently watching television and Mum appears - with George Cole.

Then my friends ring to ask if it was true.
'Is she working as a receptionist now?'
'Not, exactly. She was just playing the part of a receptionist on 'London's Burning'.' 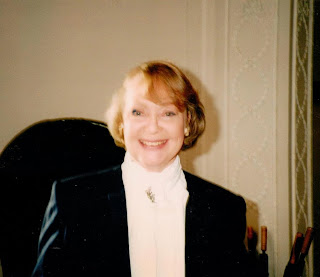 or
'We saw your mother in tears, terribly upset!'
'Oh, dear, have they been repeating 'Prime Suspect'?'
'Yes! That's what is was. Helen Mirren was the detective.' 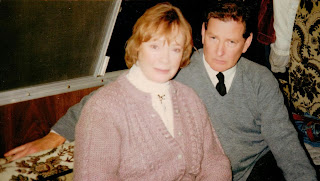 It was a bit confusing when Mum appeared as a Magistrate when she was one in real life.

She was rather shocked to see herself with a Mrs Thatcher hair-do but I told her that it would probably lead to another part. Instead she ended up wearing this curly wig. Theatrical wigs tend to be terribly itchy.

She loves climbing into a costume but would rather wear a hat.

And to give her her due, she gets to meet interesting people in interesting places. She readily admits that appearing on television is her hobby as well being her job. She loves it. We just have to be stoic viewers.