Appearing in 'Cider with Rosie' by Laurie Lee back in 1971

We were driving home when the car radio came on - by itself, which was rather surprising.  I thought it was a traffic alert but the BBC was playing Carly Simon singing You're so vain, bet you think this song is about you. My husband changed the channel to listen to the 8 O'clock News but I changed it back as I rather like singing along to, I had some dreams, they were clouds in my coffee, clouds in my coffee.

When the song ended I found we were listening to the Mark Forrest Evening Show. He was talking about Laurie Lee, the British author and poet born in Gloucestershire 100 years ago. I couldn't believe what I was hearing: it was not exactly about me but described a scene I'd been involved in forty-three years ago. 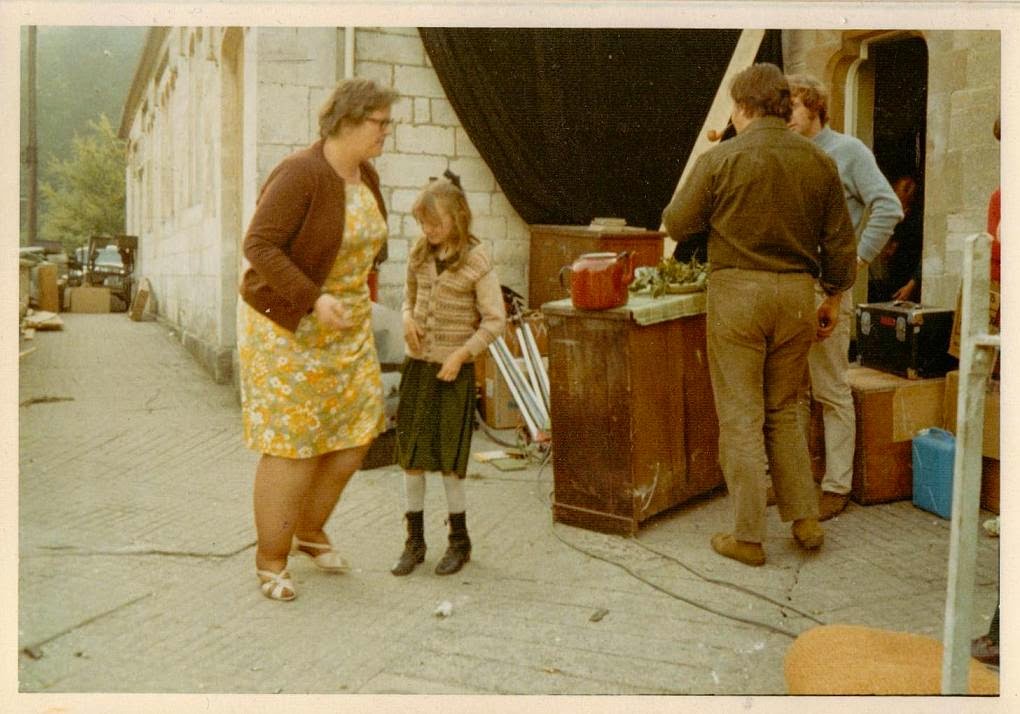 A chap called Dave had rung in from Milton Keynes to say that he had been in the BBC play 'Cider with Rose' directed by Claude Whatham back in 1971, when Rosemary Leach played Mrs Lee. It was filmed on location at Slad, the village where Laurie Lee grew up near Stroud in the Cotswolds. Although his character was not given a name he played a big boy at the village school who was slapped around the face by his teacher. He didn't mind because the director slipped him 50p 'Danger Money' after each take, but she drew blood. Later he was seen in the school playground being given an offer he couldn't refuse by a buxom girl who took him behind the bike sheds.

When we reached home, a few minutes later, I rushed inside and rang up the BBC.

'I was there, in that classroom!' I explained. 'I played the little girl called Eileen Brown who was sitting at the desk next to Laurie Lee.' The producer checked the International Movie Data Base, rang me back and put me on the air. 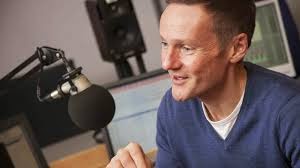 'I gather you were in Cider with Rosie with Dave,' Mark Forrest said. 'Were you in scene when he was slapped?'

'Yes! I was in the playground scene too!' 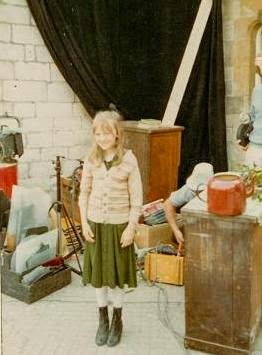 Sophie Neville in 'Cider with Rosie'

I explained that I had been cast in the part of Eileen Brown because I could play the piano. Later in the story Laurie Lee played his violin at the parochial village tea. I accompanied him, tripping over the complicated cords.

The author Laurie Lee, who was around at the time, explained that he quite fell for Eileen as they walked off stage. 'She was the first girl I fell in love with.' 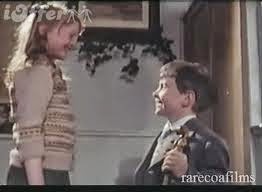 'What song did you play?' Mark asked.

'It was Oh, Danny Boy, the tune that always made Mrs Lee cry.'

I told him that Dave had been terribly brave because the small lady who had the role of the teacher really slapped him very hard. 'In the book, as well as in the BBC play, the boy simply picked the teacher up, put her on the window sill and walked out.' Claude Whatham who was directing the drama didn't tell us children what was going to happen. We were genuinely shocked. It was quite violent. 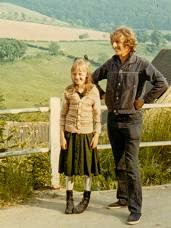 In Slad with director Claude Whatham

What made this all the more poignant was that we were sitting in the real school that Laurie Lee went to as a child. It was a true story. I read the book again recently. The boy Dave played walked off and never to returned to school again. 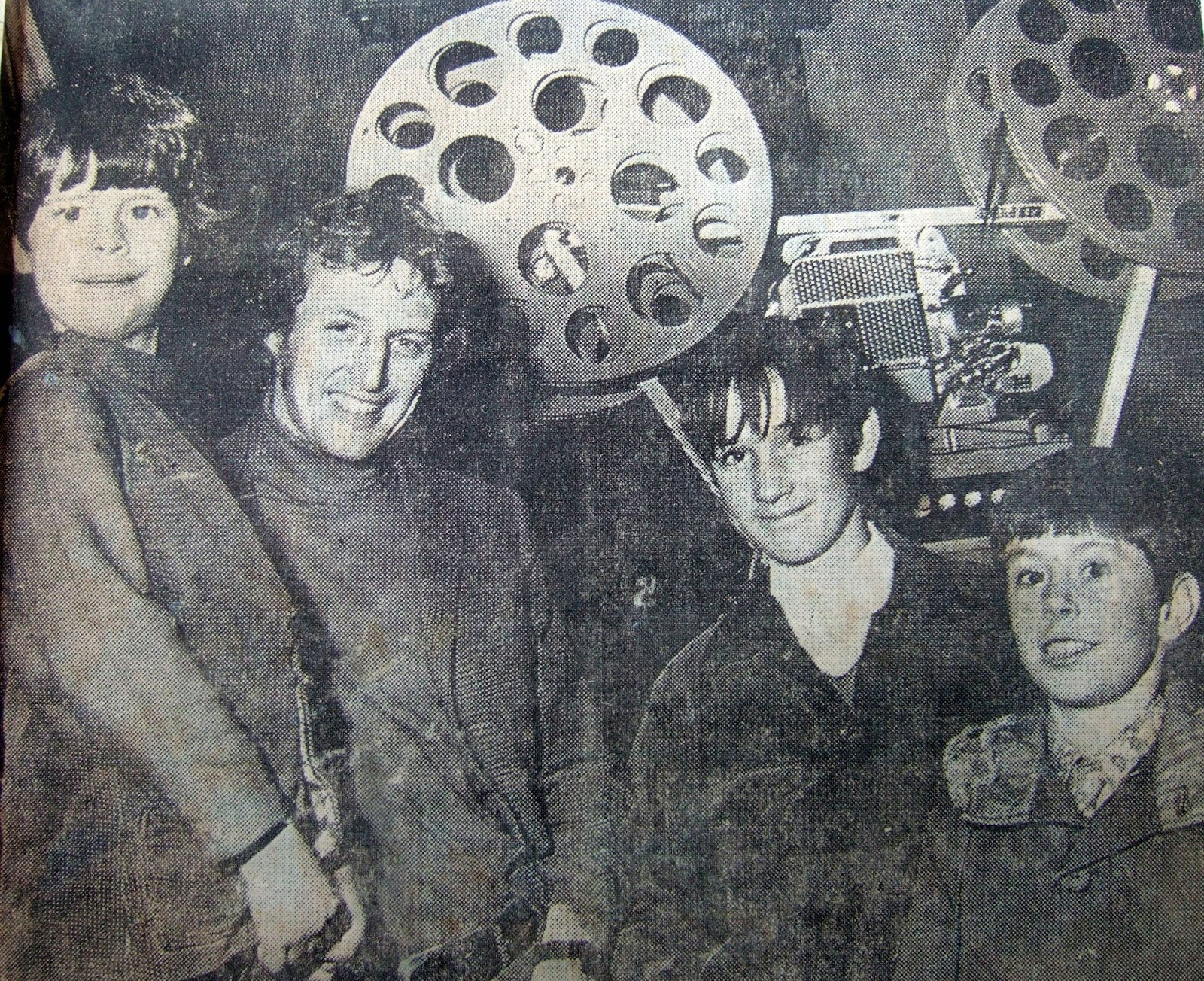 Sten Grendon with Claude Whatham and Peter Chandler and Philip Hawkes, the two other boys who played Laurie Lee in 1971

Claude Whatham ended up receiving a BAFTA nomination for Cider with Rosie, which was widely regarded as an avant garde, ground-breaking drama. Two years later he cast Sten Grendon, who played Little Laurie Lee, as Roger Walker in the Theatre Projects/EMI movie 'Swallows & Amazons'. He chose me to play Titty, his elder sister. The film score was composed by Wilfred Josephs who also wrote the theme music for Cider with Rosie (1971), which you can listen to here:

The actors John Frankly-Robbins and Mike Pratt also appeared in both dramas. I later worked with Rosemary Leach and met up with the set designer Michael Howells who had a small part as one of Laurie Lee's elder brothers.

The version that Dave and I appeared in was special in that Laurie Lee was in it, as himself - right at the end.

Why our car radio came on when it did, I do not know but listening to Dave speak about Claude Whatham was extraordinary, a piece of my own history. It seemed apt that we had just returned from The Chalke Valley History Festival. I am hoping to give a talk there next year on growing up in the 1920s and 1930s - which is exactly what Laurie Lee did.

You can read more about Claude Whatham and 'Cider with Rosie' (1971) in 'The Making of Swallows & Amazons' please click here and find a free sample of the first chapters.

To read about the real Rosie, as profiled in Cotswold Life magazine please click here 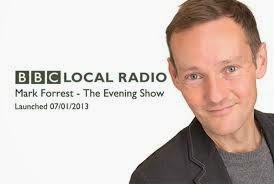