Daffodil our steamboat kept on the River Thames 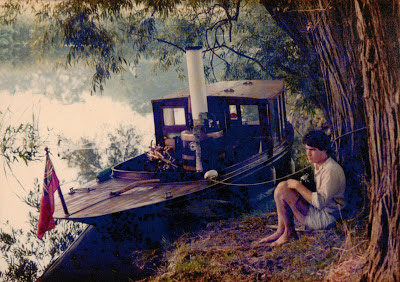 One of the characters in 'Funnily Enough' is Daffodil, my father's steamboat. She was built in 1901, a 24' river launch with a cabin long enough to sleep in and an unusual deck that extened out over her stern. For as long as I can remember her hull rested under a sycamore tree in our garden, draped in tarpulines, looking out over our lake. She had to wait for my father to find an engine that would suit her and the time to put her right. 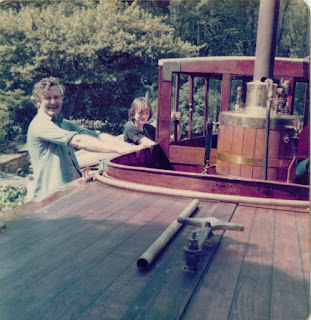 Suddenly things started to move. Daffodil was decked with gaboon and teak, a boiler was found and clad, a funnel added. She was even fitted with a steam kettle. I helped a sweet old plumber with the pipe-work that connected boiler to engine, lagging pipes that we knew would become hot. The was to make her accelerate was simply to open up the steam valve - turn on the tap. She did have a gear that would throw her into reverse. 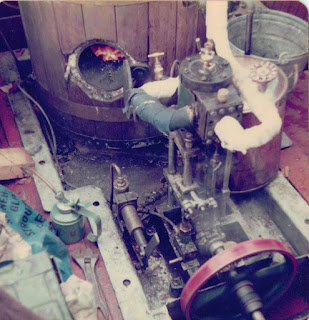 Once everthing was fitted, painted and shining we towed her down to Bossom's Boatyard at Port Meadow on the Thames. She was launched - and promptly started leaking. I leaped abraad to take out all our carefully stowed gear and provisions tucked into the cabin lockers. The boat yard calmly hoisted a cradle around her so she wouldn't sink. Her old timbers had been out of the water for too long. She was left for her timbers to swell but my father ended up having to have her clad in a fibreglass coat. 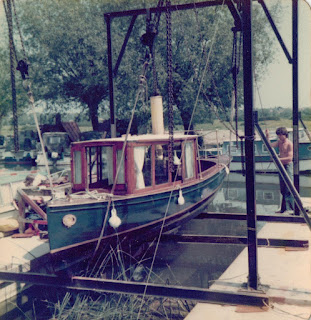 We had many happy weekends on Daffodil. It was wonderful to have aboat with a fire on board. It took about 45 minutes to get up steam but this never seemed a chore. On the whole we burnt steam coal which didn't produce much smoke. We did use wood but this menat that sparks could fly out of the chimney. They burrnt small holes in the canvas canopy, which was made to cover the cockpit. One got me in the eye when I was stading on the roof in a lock. It left me very sore for a day or too but I recovered. 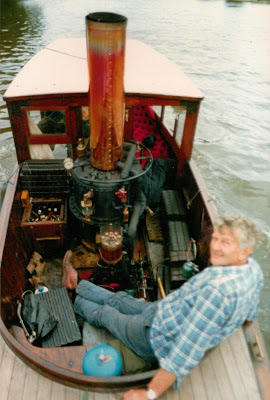 Daffodil's engine made a wonderful sound and the smell of the high grade steam oil somehow mixed well with summer days on the Thames. With steam up she could go at quite a pace but was so well designed she never left any wake. One always had to take care no to run low on steam incase extra power was needed at a weir. She was terribly fragile. We had to take great care when going through locks and did not dare take her off the river, but people came to her and she is lovingly remembered. 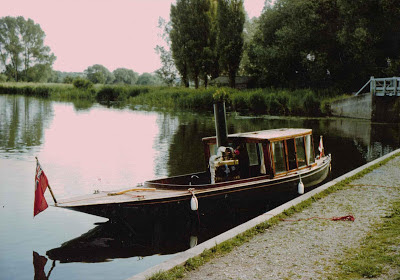 If you would like to read more about my father, Martin Neville and his boats, please go to
http://martinneville.wordpress.com/about/
Posted by Sophie Neville at 06:41